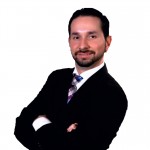 Alejandro Gutierrez was born in Pereira, Colombia. He moved to the United States in the early 2000s. Alejandro earned his Associate of Arts at the Honors College of Miami Dade College. Having developed a great interest in government, Alejandro transferred to Georgetown University in Washington DC where he earned his Bachelor of Arts in Government. Alejandro then returned to Miami to attend law school at Florida International University College of Law. Alejandro was admitted to the Florida Bar in 2013. He is also admitted to practice in the Southern District of Florida.

Alejandro’s experience includes working as a Student Attorney for the Investor Advocacy Clinic of the FIU College of Law where he helped investors who had disputes with their brokers, interning for the City Attorney’s Office of the City of Miami in both the Employment and Government, Land Use and Quality of Life Division and working as a research assistant for Dean M.C. Mirow.

Alejandro authored “The Pitfall of At-Will and Just Cause Employment” which is a comparative analysis of employment law between the United States and Colombia.

Alejandro Joined CP Law Firm in July 2015 after having practiced litigation in the areas of Personal Injury and FLSA law for the previous two years.